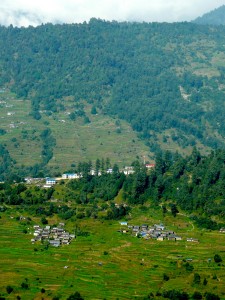 Nangi, Nepal 2012. Mahabir Pun grew up in the old village which is seen in the lower left corner of the picture.

Every day we play the odds when we cross a street, eat sushi for lunch, choose a life partner or change careers. Ben Franklin knew back in the 1800’s that nothing but taxes and death were certainties. So why do we take chances when the risk of failure is high? For some, risk taking is the driving force, the adventure in itself…the constant drama of uncertainty to fuel an everyday life. For others it’s a need to improve or prove oneself…driven by complex social, cultural and personal factors. And for others it’s driven by the belief they can mend the world by sacrificing outside of themselves…the altruistic motivation. 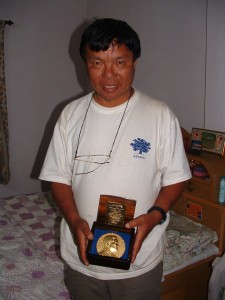 This is a story about one man, Mahabir Pun, and what has driven him to sacrifice wealth, family life and personal safety to educate his country through the modern stream of the Internet. It is the story about how his humbleness and dedication has engaged supporters in his country and around the world. It is a story about his early years, family life, cultural molding, education, strengths, weaknesses, failures, successes and dreams as he works tirelessly in a country suffering some of the worst power outages in the world. Think about it…the Internet without a reliable source of electricity…I do think about it, every time I sit at my computer, conveniently plugged into the wall socket, lite by my desk lamp, as I begin this book.