In 1994, two years after finishing his undergraduate degree in Science Education at the University of Nebraska in Kearney, Mahabir was teaching and living in Nangi. The village school, partially funded by the government, paid for education only up to the seventh grade. Mahabir had added an eighth and ninth grade. The teachers’ salaries for the eighth and ninth grades were funded by private donations from colleagues and friends in Nebraska. More students came from distant villages to study at the higher level. Despite this success he was not satisfied; donations are not sustainable, nor do they foster self-reliance. 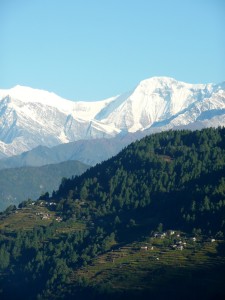 View of Himalayan mountains from campground in Nangi.

That year he collaborated with a Japanese organization called The Institute for Himalaya Conservation to build a campground in Nangi. His principles were closely aligned with IHCs major goal to nurture creativity, and self-reliance for village development so it was a symbiotic partnership. The IHC funded a campground along with a community dining room, kitchen and shower/toilet facility. Ground was leveled in tiers to accommodate the large tents used by trekking agencies. Trekking companies, both foreign and Nepali based, started bringing groups of trekkers. For two years the camping business grew and provided income for the school…Mahabir’s dream was taking flight…only to be literally shot down by a civil war. 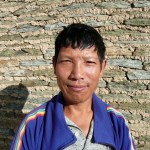 Tek, head chef for the new lodge which replaced the campground in 2011.

In 1996 the Nepali Civil War erupted between the government and the Communist Party of Nepal (Maoists). Over the next ten years Mahabir’s dreams were sidetracked by a civil war that killed more than 15,000 people and disrupted rural development. Yet despite a civil war, fleeing tourists and NGOs pulling financial support he managed to fly under the war’s radar and continue a personal war against poverty and ignorance.

Join me next week for the continued saga of my trip to Nangi…meet my old and new friends…especially the children.

2 thoughts on “A Place To Hang Your Sleeping Bag”