Last week I asked Mahabir the following question: “Years ago when Nangi clinic first started you told me your goal was to have foreign doctors staff the clinic six months out of the year. Are you still wanting to achieve this or has the TeleMedicine program and help from Kathmandu Model Hospital changed your plan?”  He replied: “If we find a doctor to stay in the village for sometime, that will be good. The idea has not changed.” Mahabir’s solution is simple; just find someone, anyone to provide care. He does not care to discuss the difficulties associated with foreign medical volunteers as discussed in the previous post. That is because he is a throw mud on the wall and sees what sticks kind of man. 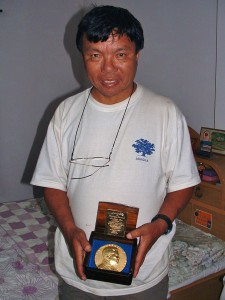 There is something to be said for this style of entrepreneurship…a sort of put your head down and plow ahead grabbing success when it’s available and disregarding failure and it’s debris. Its basis seems to be hope and a belief that you will eventually succeed if you try hard and keep throwing mud. No one can argue that Mahabir has not been successful. He has connected hundreds of villages with his wireless project. He has received many awards, the most notable being: The Ashoka Foundation, the global association of recognized social entrepreneurs, elected him Ashoka Fellow in 2002 https://www.ashoka.org and in 2007 he received the Magsaysay Award, http://www.rmaf.org.ph which is described as the Asian equivalent of the Nobel Prize. But this method has consequences and in this business some argue it works against him.

Because I’m a planner it’s been one of the most difficult interfaces I’ve had with Mahabir…his disregard for preparation, especially when it comes to financing projects. And I am not alone in those sentiments after interviewing dozens of people who have worked with him. He is notorious for forging ahead on projects without plans or funding. He is impatient and the process of planning, fundraising and precise execution of a project is not only his weakness but also his Achilles heel. It makes it near impossible to apply for grants, especially from top-notch organizations like the Gates Foundation, when you cannot show financial transparency or organizational long term plans. Yet, somehow it works…he has touched lives and changed their trajectory.

Have you ever volunteered for an organization and discovered it wasn’t what you thought it would be? Your experience doesn’t need to have been abroad because your local school, church or scout group can test your dedication. Share your experience in the comments section and help others understand the ups and downs you faced and how you dealt with those challenges. See you next week with some fun pictures of Nepal.

2 thoughts on “Throw Mud on the Wall”