Mahabir’s mother, Purbi Pun, had lived in Ramche before moving into her husband’s ancestral home. Ramche is a small village that lies across a narrow valley from Nangi. A lovely waterfall at the valley’s cirque high in the hills gives birth to the stream that rushes through this valley during monsoon season. As a young bride Purbi would have crossed the steam to reach Nangi high on the opposite hill.

She did not have the typical existence of a Magar farmer’s wife. Like many a Gurkha army wife she would only see her husband for six months every three years when he returned to Nangi on leave. I would suppose having generations under one roof made it less burdensome than modern single parent homes, but I would also imagine it fueled her independence. As did her journey to Ipoh and three years in the Malaysian culture. She would have been more worldly then her counterpart who never ventured farther than Beni, a six-hour walk from Nangi and the closest large town. She lived in Malaysia for three years and had two more children before returning to Nangi with her husband in 1963. I wonder how they settled into a more conventional marriage after her sojourn into another part of the world? 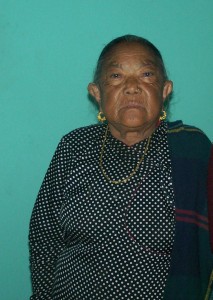 According to Mahabir: “My mother is very intelligent woman and what I think is that if she had gotten chance to go to school in her young age, she could have been a brilliant and smart student.” I met Purbi last year when she came to the hospital in Chitwan for a check-up. Suffering from emphysema contracted from decades of cooking over open wood fires in her home, she is in tenuous health. She also suffers from an irregular heartbeat but despite her lung and heart problems she always recovers and surprises her doctors. Last year after recovering from a bruising fall, pneumonia and heart failure she was able to live with family members and continue to cook. My impression is at 88 years of age she is strong willed, sharp minded and intelligent. Getting right to the point she had little patience or use for us doctors when we couldn’t alleviate the pain in her arthritic hip…I am thinking Mahabir inherited this candor gene and accounts in part for his successes and disappointments.

Have you ever moved to a location far from family and friends? How did you cope with the change? Share your story with the readers by clicking on the comment bubble in the upper right hand corner of this post. When I was 18 years old I loaded my VW bug with all my earthly possessions and with a former school friend and her demonic Husky dog headed to Colorado…but that’s another book. Join me next week for more.