During the 1960’s when Mahabir was attending grammar school there was a shift in the Nepali government’s involvement in education. Consider; the first school opened in the 1850s and was only attended by the high-ranking Rana ruling class children. Over the next century as Nepal was moved towards Democracy by the Rana regime, specifically in the 1950s, students from all societal classes began to attend schools in Kathmandu and other cities. However, progress in rural areas was much slower as there was little government support for schools and education in rural Nepal, which represented a significant portion of the population at that time. It wasn’t until the early 1970s that the government started in earnest to provide free education in the form of building more schools, providing teachers and textbooks all over Nepal. This was known as the “New Education Plan”. Students received free services up to the 5th grade. Students who could afford the nominal fees stayed for 6th to 8th grade. School was not mandatory so the poorest of poor often didn’t attend because they needed to work the fields or if they did, it was only to the 5th grade. 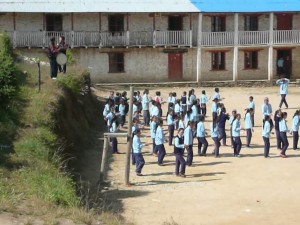 Himanchal Higher Education School students being called to formation exercises before class by the beating of a drum. The exercise prepares students mentally for a day of studies. In the background are classrooms and the science center.

Kisna’s insistence that his son, Mahabir Pun, attend school indicates he had phenomenal foresight and perhaps premonitions of his son’s talents. Mahabir studied in Nangi up to the 7th grade. He recalls an important event during 7th grade when a government inspector came to review the school. It was a solemn occasion with much pomp and circumstance. Actually I cannot recall any school event in Nangi that was not accompanied by formality and a sense of grandeur, as is the Nepali way. It makes any occasion quite memorable, building a consciousness of unity and importance to all involved as illustrated by the start of each school day with drumming.

Life is still hard by world standards for students in Nangi as depicted in this photograph of a 12th grade student carrying water back to his one room hut.

Even though his father thought education was important, Mahabir was first a farmer’s son. When Mahabir talked about his early school years in Nangi he said, “mostly we just spend some extra time in the school…mostly we worked in the fields and lived with the cattle and the sheep that we took to the forest for grazing.” “There was no homework because no pencils or paper to work on.”  I found it peculiar that although his father could read and write he did not teach Mahabir himself. Perhaps he did not have the time or feared his intelligent son would soon outstrip his own knowledge.

Mahabir then attended 8th grade in a near-by village called Mallai but by the late 1960’s he had exhausted all the available education in his small village. His father wanted him to attend what was then known as high school, 9th and 10th grade. This would require a major move for the family…not an easy task for a Nepali subsistence farmer. What would you do if you were Kisna? Share your thoughts by clicking on the comment bubble in the upper right hand corner of this blog entry. Join me next week to see how Kisna continued his quest for his son’s education.