Flower stalls, such as this one at Pashupatinath Hindu Temple, would have been a common sight in Kathmandu when Mahabir was a young student.

After Mahabir completed the 10th grade he was sent to Kathmandu in 1971 to continue his education. During this period of evolving Nepal education the 11th and 12th grades were considered college level studies but there were no colleges in the Terai region where he lived. His father did not have the money to send him to school so Mahabir’s father applied for a scholarship from the Indian Army. As a retired Gurkha his children were eligible for educational scholarships. Most retired Nepali Gurkhas were unable to navigate the mine-field of paper work required to apply, but a family friend helped him compete and submit the application. Mahabir did not name this man but I could see he was greateful for the assistance. Mahabir is a humble man and he knows along every step of his journey many hands have reached out to guide him. Some of the encounters are brief and others last from the time of the first meeting, such as Dr. Leonard Skov who you will meet later in the story. 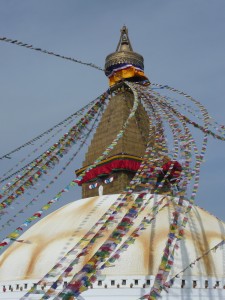 Mahabir received a scholarship of 75 rupees/month….roughly one US dollar. That’s one dollar…for a month. Better than nothing but still hard for me to wrap my head around the value. Back then a dollar bought a good bit of rice and lentils, but how did any student live on one dollar when they needed books, paper, pencils, clothes, room and board. Knowing Mahabir I’ll assume the clothing, room and board were not an issue. Even now he wears the same clothes day in and day out because he gives no thought to style and he lives a spartan life with few possessions in the modest home of a relative. He would have walked everywhere as a young student in Kathmandu and his most useful school tool would have been his mind. Mahabir never squandered his time in school and lack of financial resources did not hinder his growth.

Kathmandu back then was smaller, less hectic and filled with western flower-power hippies seeking a simpler life, but it must have been a huge change in life-styles from the country-side of his youth. Have you ever moved from the country to the city? Share your experience by leaving a comment. Return next week and read how Mahabir used his education after leaving Kathmandu to help his siblings.