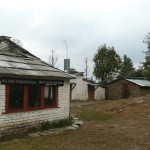 Mahabir Pun developed five income earning projects between 1994 and 1996 with the help of his Village Development Committee (VDC) and various non-governmental organizations (NGOs). His first project with the Institute for Himalayan Conservation (IHC) was to build a campground at the top end of Nangi Village. The IHC was working on nature conservation projects in the area and it was a good fit because of the many tourists who had started coming to the Myagdi District. They were not only volunteers at the school but looking for a different trekking experience; off the crowded traditional trails such as Everest Base Camp and the Annapurna Circuit. A desire to avoid the mistakes made during the early tourist crush of the 1960s and 1970s, such as depletion of natural resources, served as a grounding drive for the early campground development which used composting toilets and solar hot showers. 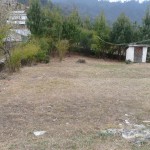 Terraced tent area at original Nangi campground was replaced with a modern lodge in 2011.

Also in 1994 through his contacts in Nebraska money was raised to buy the first yak for the yak breeding project. The yaks needed a higher elevation than Nangi so it was started on the slopes of the Annapurna mountains several hours walk from Nangi in an area called Khopra (3660 m). The ultimate goal was to develop a crossbreed herd composed of Dzo (male) and Dzomo (female) which are bred by crossing a yak and cow. They have all the attributes of yaks being strong and capable of carrying heavy loads but the females produce very rich milk which is used primarily for production of cheese. This gave rise to the third income earning project: cheese production. Two other smaller projects were started in Nangi: jam making by the Aama Suma (local women’s group) and rabbit breeding. 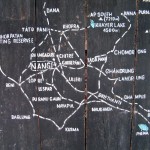 Khopra proved to be an enticing region which faced Annapurna South and was a days walk to the sacred high lake called Khayer Lake at 4500 meters. Because the villages had to staff the area with yak herders another campground was developed in Khopra along the magnificent ridge through funding by the IHC to accommodate the more adventurous tourists.

Mahabir’s larger dream to build better schools and improve the finances of the local villages (Nangi, Ramche,Tikot and Paudwar) rapidly took shape and then came to a screeching halt when the Maoist War started in 1996. Have you ever had to put a goal on hold due to circumstances larger then yourself. Share your story with my readers and return next week for more adventures.