One thing Mahabir Pun has in his life is a tremendous amount of support from family, friends, admirers, volunteers, non-profits and institutions. He even has support from the chaotic Nepal government since receiving the Magsaysay Award in 2007 for Community Leadership. He can call the Prime Minister’s office and be granted a meeting the same day. Although the government has yet to financially support his latest request for an Innovation Center (think tank) they do meet with him to discuss his ideas. 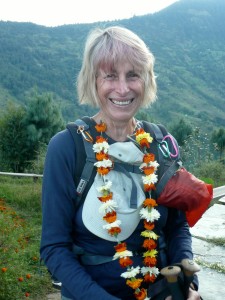 A volunteer receives a traditional necklace of flowers when leaving Nangi village after volunteering and teaching in the school.

The kick off for support started in 1993 after Mahabir returned from Nebraska to Nepal with his undergraduate degree in Education. Dr. Leonard Skov, then Dean of Education at UNK, raised money for Himanchal Higher Education School in Nangi through the university’s foundation for several years. Legal complications caused Dr. Skov to shift the fundraising through the Kearney Public School fund, but again this was fraught with legal technicalities. During these years the money raised amounted to a few thousand a year. The Nangi school, was growing and Mahabir needed more money to pay teachers in the higher level classes because these were not supported by the Nepalese government.

In 2000 Mahabir asked Dr. Skov to create a non-governmental organization (NGO) specifically for the school and fund-raising projects. Named after the school in Nangi, Himanchal Education Foundation (HEF), a non-profit organization, was born and continues to be the major networking link for the original group of supporters in Kearney and the volunteers worldwide. Since the birth of social media Mahabir now uses his Facebook page to communicate with his supporters. https://www.facebook.com/pages/Mahabir-Pun/43662749774

Have you been a volunteer for HEF or worked with Mahabir Pun? Share your experience with my readers by leaving a comment. Wishing you a peaceful and healthy gregorian new year. Please join me next week for stories about the volunteers.