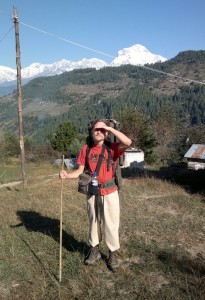 Jonni is from Finland. He was one of the first volunteers to work with Mahabir on the wireless connections in Nangi, but Mahabir Pun also saw another possibility in this Finnish raised man…the skills to build a sauna. His name, pronounced “yaw-ni” in his native tongue posed a problem because in the local Nepalese dialect refers to women’s’ genitalia…so Mahabir suggested using the American pronunciation “John-ni”. Mahabir is a man of few expressions, but he did seem amused by this dilemma.

Jonni built the sauna during my first visit to Nangi in April 2002. The lean-to type structure was built of stone and attached to the end of the computer lab. It consisted of an outside changing room with hooks to hang clothing, a bench and a shower head which belched lovely cold water for after rinsing. This lead into the sauna room which had two walls lined with a double row of wooden benches…kind of like bleachers…and the stove. The idea is to fire up the stove with wood to heat rocks on the top, then throw cold water on the rocks to make the steam. 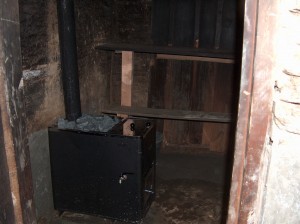 Looking into the sauna. The Finnish stove has a water well and spigot for hot water. The wooden bench can be seen in the background.

He initially used a typical Nepali metal wood burning stove…which disintegrated after a few years of heavy use. Ultimately after the replacement metal stove failed he and his father decided to bring a traditional Finnish wood burning stove and rocks to Nepal. We are talking cast iron and rocks…and again ingenuity rises to the challenge. They contacted the Finnish consulate and were allowed to put the stove and rocks in the packing crate of a Finnish diplomate newly assigned to Kathmandu. It was only a matter of getting it from there to Nangi…Mahabir used his contacts and by bus, car, taxi and horse the stove arrived. It’s been in use about eight years and is standing up to the daily challenge.

The sauna is attached to the school building on the left in the background and barely visible past the tree. After a long day of back bending for paper making the women often take a steam.

I was skeptical at first…or maybe it was more curious to see if the villagers would use the sauna. I couldn’t find any references to the use of steaming or sweat lodges in the culture. I knew the physical and mental health benefits of the sauna are well documented. In a culture where emphysema and asthma plague the population from open cooking fires that burn in the homes, the health benefits of steaming the lungs was phenomenal. It loosens phlegm, dilates the airways and promotes expectoration…but would they use the sauna?

The teachers and village leaders were instructed on it’s proper use…and like the old saying “build it and they will come”, the sauna proved a popular gathering place after work. Families donated wood. Women and men steamed separately; first the women, then the men. I loved the sense of community after a long day in the clinic…I would join the women as they came in from the fields…stripping down to just a sari wrapped around their bodies the women lined the benches as tightly packed as sardines. My favorite moment was the “turn”. Someone would utter a command…and we would all turn so our backsides faced the heated stove…like flipping pancakes on a grill.

Join me next week for some funny pictures depicting the quirky side of Nepal.