Mahabir Pun also lives in Kathmandu where he conducts most of his business at his restaurant called “Mahabir’s Centre for Nepal Connection“. The restaurant decor is modern and the chef serves excellent food. The location, in the center of Nepal’s capitol, is located on the second floor of a pedestrian mall which offers a quiet atmosphere for business. Here he meets with local and foreign donors, politicians, friends and volunteers to discuss ideas, fund projects and implement goals. He also travels abroad to lecture several times a year. This gives him little time at home in Pokhara when combined with travel in Nepal to supervise new wireless sites or help communities build their own. 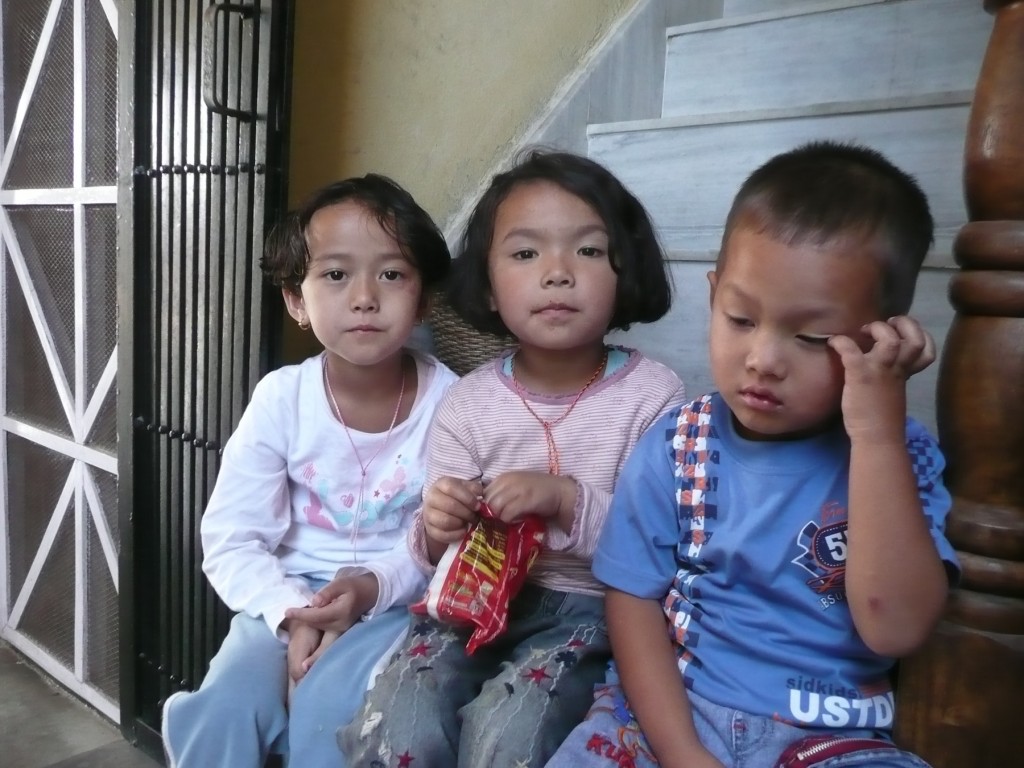 Jharana (center) with her cousins in Pokhara. 2009

Ommaya travels to Kaphaldanda to visit her family once a year and Chitwan a few times to bring the children to see Mahabir’s mother who is in her late 80s. Otherwise she can be found at home in Pokhara. When I asked her about his long absences she was perplexed by the question. She had no answer to a question which posed no problem in her marriage. She was content. When I asked Mahabir about it, he smiled and said, “Nepali women are used to it.” Especially Magar women, because over the decades they watched their husbands leave to work in the British and India military or for the Hong Kong police. Over the last few decades many rural Nepali men have sought employment as foreign migrant workers leaving the women to manage the family, home and farms. Separation is not only a means to a job, it is viewed as a way to survive and improve a family’s finances or education.

Mahabir Pun bridges the gap using the very technology that keeps them apart. He, like many absent fathers, calls his children almost daily and they Skype a few times a week. He will stop in Pokhara, even for an afternoon, to visit when traveling to the western regions of Nepal. During one visit at his home I watched him with Juna and Jharana, his daughters. It was a glimpse into a rarely seen part of his character. He is tender and proud. He told me, “They love me so much and I love them so much too.” This acknowledgement shared so freely stunned me. If you have never met the man…he says little and what he does say is never personal. He is a man who speaks with his actions.

Join me next week as I conclude this part of Mahabir Pun’s life and move onto his present projects.