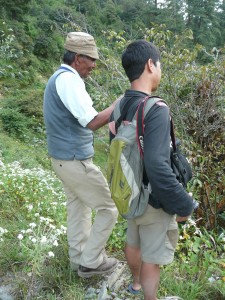 Jitman (left) and Chitra talk about Mahabir’s early life while standing at the old home site.

The land Mahabir’s father cultivated was on the opposite side of a small valley in front of their home. This small valley sweeps down and joins the deepest valley in the world, the Kali Gandaki Gorge. The gorge separates the major Nepali peaks of Dhaulagiri, towering at 26,795 to the west, and Annapurna rising at 26,545 feet to the east. Local villagers simply call these majestic mountains, Himals; which means snow covered mountains.

The majestic peaks have tales to tell of pilgrims trekking to sacred pray sites and mountaineers who risk life and limb to reach their sacred peaks. But the stories of everyday life in Nangi village that molded Mahabir’s early years can be found on the terraced fields and in the modest homes. He watched his parents toil day after day farming their fields with little choice in life other than to grow food to survive. To stand at the old home site and look out at the valley was to see the same mountains and villages Mahabir gazed on as a child and teenager and understand the impact they had on his development. How can you not be inspired to reach for the stars when you have the Himals to help you climb. 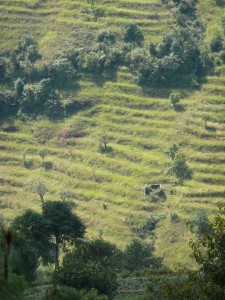 Kisna’s terraced fields which are no longer farmed by the family.

One day while visiting the old family home site, Jitman, a life long neighbor to the family, told me a story about Mahabir’s father, Kisna Pun. Jitman stood on the edge of a stone wall and pointed to a ramshackle dwelling and abandoned terraced fields on the hillside opposite the old home site . He told me this was were Mahabir’s father had an old shed-like house and his farmland. That house was torn down and rebuilt many years ago but Jitman said Kisna used to stay there and guard his fields from roving bands of monkeys. I have never seen the common Nepal rhesus macaques monkeys in Nangi over the ten years I have been visiting. I can’t recall anyone complaining about badly mannered, grain stealing monkeys, but apparently fifty years ago they inhabited the area stealing grains and fruits. They are still found in the adjacent Dhorpatan Hunting Reserve which is the only hunting reserve in Nepal.

Do you have a story to tell about where you lived and how it influenced you as an adult? Personally speaking my adulthood preference for rural locations can only be attributed to growing up in smog ridden, traffic choked northern New Jersey. Share your story with your fellow readers and join me next week for more stories about Mahabir Pun.