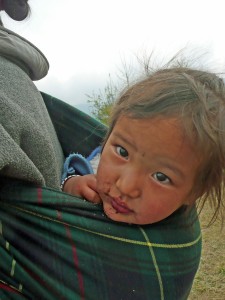 A toddler enjoys the comfort and safety of a back sling.

Mahabir told me his early childhood was unremarkable and ordinary. Like all Nepali children he was first carried in a shawl tied to his mother or nestled in a basket transported by his mother using a forehead strap until he was a year or older. The strap, called a namlo, attaches to the basket at both ends, then the mother slips the strap over her head centering it on her forehead before standing and lifting the basket. Babies are padded with layers of rags, organic matter and a shawl is thrown over them. Every once in a while one will protest and a little hand will shoot up batting at the covers, but most are content. Everywhere his mother went he would have been at her side. Babies and toddlers will sit for hours, content in the large baskets nestled among the fields, as they watch their parents cultivate, plant and harvest. I don’t see infants playing with toys in Nepal. It’s as if life is one big playground, they watch, they learn and they start working when they can walk and carry. 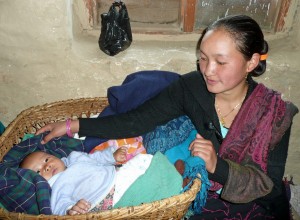 Bipen is tucked into his traditional basket by his mother Mina.

During his childhood Mahabir’s extended family would have helped care for him because generations lived under the same roof or nearby. Before the introduction of healthcare workers and midwives, the husband’s mother, grandmother and aunties attended deliveries and guided young mothers. Traditionally, in Magar communities, a husband brings his new wife to live in his parent’s home. The family adds a room onto the home if affordable or simply continues to share a single dwelling…generations melted together for companionship, utility and survival. 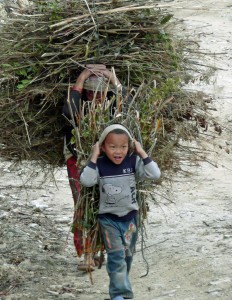 A young boy carries firewood using a head strap “namlo” for the household.

Mahabir’s mother, Purbi, was from Ramche and as a young bride she would have left her family and walked the three hours to Nangi. She then became a member of her husband’s family. She would not have traveled home regularly to see her parents or siblings due to her new responsibilities as a wife and daughter-in-law in her new family. Most women only see their families once a year during religious festivals when families travel for the purpose of visiting and celebrating together. Sometimes this can result in abusive conflicts between in-laws but Mahabir does not recall such conflicts between his mother and her in-laws.

Although the number of American households with three or more generations has tripled in the last several years I think it’s a safe bet that most of my readers are not from extended family households. If you were or are from an extended family household please share your stories with your fellow readers. If you are not, then what do you think about the idea? Join me next week and meet Mahabir’s siblings.