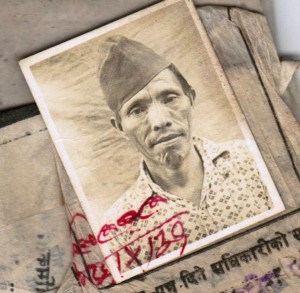 Kisna Pun, father of Mahabir Pun and husband of Purbi. Photograph from his Nepalese citizenship card.

I had planned to talk about Mahabir’s siblings but it seems proper to first talk about his parents. Last October, when I stayed with Mahabir’s family in Pokhara, Nepal, we sat for two days and talked about his life. I took copious notes but at times I was so drawn into the conversation I stopped writing and simply listened and watched his face….regretting my lack of audio equipment. Each time he spoke about his father there was a passionate respect in his voice. He would glance away and I could see memories pass over his eyes…so many memories of his father because they farmed together for many years and his father clearly was the most influential person in his life. He told me; “My father was a visionary man and he is the only person, who understood the importance of education even if he did not have any education. He could write and read a little bit but not much. He used to tell me to study hard in the school and always worked hard to send me to school.” 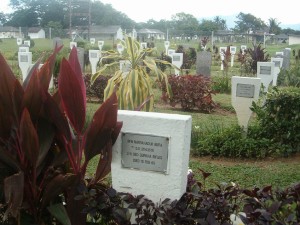 Ipoh, Malaysia Gurkha camp where Kisna was stationed. Mahabir lived with his family in the camp as a young child.

In 1960, when Mahabir was three years old, his father moved the family to Malaysia. Mahabir doesn’t remember anything about the journey or those years spent in Malaysia.  According to Mahair’s mother, Purbi Pun, they stayed for three years in a place called Ipoh where his father was stationed as a Gurkha. The journey took weeks and was made by foot, train and steamship. First they traveled by foot from Nangi to Bhairahawa, Nepal which was along the border with India (now called Siddharthanagar, this is the gateway to Lumbini; birth place of Gautama Buddha). From there they traveled by train to Calcutta then onto Singapore by steamship. Ipoh is another 348 miles north of Singapore through the western frontier of Malaysia and this was probably done partly on foot and partly by train.

There are few photographs from Mahabir’s childhood but his younger sister provided their only photograph of Kisna Pun, Mahabir’s father, from his citizenship card. Mahabir and his younger brother, Ratna Pun, visited Ipoh in 2008 to see the army barracks where his father was stationed with the family from 1960 to 1963.

Join me next week and meet Mahabir’s mother, Purbi Pun. I had the honor of meeting her last year during my visit to the Terai. Do you have a memory of moving as a child? Share your experience with your fellow readers….for me, I was born and raised in the same town in northern NJ…something to be said for stability, but makes me wonder whose vagabond genes I inherited.