Nepal social culture was, and is still to an extent, governed by a complex social classification called the caste system. Officially abolished by the Nepal New National Codeof 1963, tradition dies hard.

Slowly undergoing collapse by intra-caste marriage, education and changing political tides the caste system was still strong in the 1970s and 1980s. The higher castes had access to education through status and employment. Lower castes were designated to their assigned status. For example, if you were born into an agricultural caste you would farm with no hope for another profession.

Mahabir Pun’s family belonged to an ethnic group called Pun Magar. Traditionally they were employed as subsistence farmers and in the military. Mahabir’s father, Kisna, defied the odds by pushing against the caste system to educate his eldest son back in the 1970s. He sacrificed his livelihood by sending Mahabir away to school because subsistence farmers depend on their children to take over as they age. As the eldest the responsibility to educate his younger siblings then fell to Mahabir. As a new 19 year-old teacher he describes this time in his life:

“I was always busy in the school and I did not visit my parents frequently. However, I helped my father by giving whatever money I made from the teaching job. I sent my two sisters and one brother to college in Kathmandu after they finished their 10th grade high school. My youngest brother went to college in Chitwan. 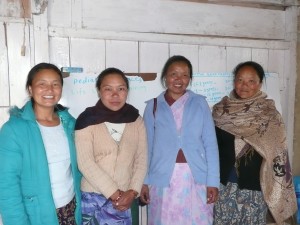 Since I knew how difficult it would be to live with very little money in Kathmandu, I spent all the money that I got as salary to support my brothers and sisters to go to college. Therefore I did not save any money for myself even after teaching more than 12 years in schools. That was why I did not even have money to buy my air ticket to go to college in Nebraska, USA after I was accepted there.”

You could argue that Mahabir Pun’s generation is changing the tide of Nepali culture; opening doors for education; setting the example and living their dreams…but it was really his father’s generation that started the ball rolling….down the Himalayan hillside and breaking into every strata of Nepali culture. Was there a time in your life when you stepped out of your comfort zone? Share your experience with my readers. Join me next week for more stories about Mahabir Pun’s early teaching years.