Mahabir Pun didn’t start his college career at the University of Nebraska at Kearney as you would expect. First, he arrived January 4, 1989 during winter break when most of the university was shut down. Second, his English speaking skills were challenged. He could 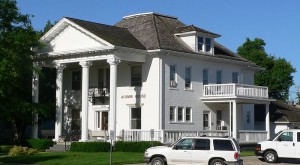 read and write English well but his  conversational English didn’t allow for easy banter with staff or students. No, Mahabir didn’t spend those first weeks buried in books, chatting with other students and finishing his assignments…he spent it figuring out how to shower and in front of the dormitory lounge television.

“The college was closed because of the Christmas vacation. Only the Resident Director was there at the dormitory. There was cable TV in the lounge and we spent most of our time watching TV. That was the first time in my life I used the remote control of TV and I enjoyed watching different channels for many hours. However, we had problem in taking shower. For the first two days we could not take shower. We tried to take shower in the bathroom but there was no water. We turned the knob of the shower left and right many times and there was no water coming from the shower. We thought maybe there was no water just in the shower. After two days, I asked the Resident Director as when there would be water in the shower. She told that there should be water in the shower. When I told that there was no water coming, she came to the shower room and turned it on and there was water. She showed us how to turn the shower on. What we were doing was that we were just turning the knob left and right only. What we had not done was pull the shower knob. We had never used that kind of knob in Nepal.”

Have you ever traveled and been stymied by a simple task? Share your story with my readers. I recall a fellow traveler in Nepal who had never seen a pit toilet and instead of squatting over the pit he sat down with legs sticking out the door. Join me next week for more about Mahabir Pun’s early college days in Kearney.