Mahabir Pun did not spend his time in front of the TV or figuring out how to shower for very long before his first semester at University of Nebraska at Kearney went into full swing on January 9, 1989. Instead, he spent the next few years pouring over textbooks and assignments. Under Dr. Leonard Skov’s guidance he began his studies with the same fervor that the deity Manjushree (or Manjusri), a Tibetan saint, had cut the Kathmandu Valley’s Chobhar ridge in half with his mighty sword to drain the waters and expose the fertile valley. Mahabir Pun yielded his mind as a mighty sword and started the first semester with 18 credit hours of chemistry, calculus, geology, education and conversational English. 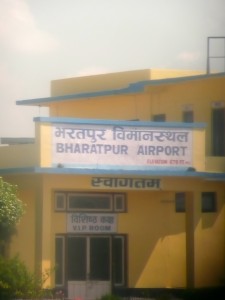 I do appreciate the English subtitles when traveling in Nepal.

His poor skills in spoken English posed a challenge in the everyday classroom. Mahabir told me it was the main problem in the beginning…and the reason he got lost in every airport between Kathmandu and Kearney. The teachers spoke too fast and although he could read and write English he had never had the opportunity to converse except with a few tourists in Nepal. In order to compensate he started to tape all his lectures and spent hours listening to them over and over in order to complete assignments and learn the material. By the end of the fisr semester he felt comfortable talking to people in English and admits it became easier in the classroom.

He also faced another challenge posed by his Education teacher who required all assignments be typed for submission. Mahabir had never used a typewriter or computer and in 1989 there were few computers available for students on campus. He secured permission to handwrite his papers but promised to learn how to type by the end of the semester. The outcome of this challenge is a testament to his continued ability to inspire others to assist him in his quests. Mahabir told me: “One of the American students gave me his typewriter to use and I started learning to type my paper. Thus I became able to submit my final project typed in paper. The teacher was glad.”

Have you ever faced a challenge coupled by the limitations of language? Share your story with my readers. I admit to being challenged by all language, even my native tongue…thank you Associate Press Stylebook and spell check. Join me next week for more stories about Mahabir Pun’s school days in Nebraska.