Mahabir Pun began to expand the teaching pool by hiring a retired Gurkha from Nangi, called Padam, who was fluent in English. He taught English to the eighth and ninth grade classes. I met Padam when I first went to Nangi in 2002. He was my Nepali teacher. He was a kind man who was very patient with my fumbling language skills. He died a few years later from complications of alcoholism. 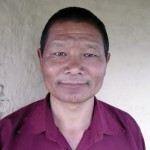 Mahabir was a good teacher but he was first and foremost an entrepreneur. He knew from the beginning he would not stay in Nangi because his vision for higher education had expanded to include neighboring villages, so he set about to replace himself. Using his uncanny judgement of character, he chose teachers from the school to further their education. He contacted the American Nepal Education Foundation, the very organization that gave him grant money during his school years in Kearney. He requested they finance Bachelors Degrees for five teachers from Nangi. This was a two year degree program in 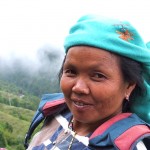 Pokhara which would certify them to teach up to the 12th grade. Four out of the five teachers completed the course in 1996 and returned to Nangi. They were; Ganga, Kishan, Prem, and Hemkumarie. All the teachers can still be found walking the school aisles except Prem who died a few years after finishing. Hemkumarie, Ganga and Kishan later returned to Pokhara for their Masters Degree in their respective disciplines. Thus having secured teachers for higher education Mahabir turned his attention to helping the village develop income earning projects.

Have you ever done such a good job that you weren’t needed anymore? Shouldn’t that be the goal of any

Kishan Pun teaches Computer Science and Math to all grades.

volunteer? Share your story with my readers and join me next week to read about the first campground which ultimately birthed the present day lodge.