Mahabir Pun returned to Nepal in September 1992 with a bachelors degree in Science Education from UNK. He had fulfilled his dream of studying abroad but during his years in Nebraska other dreams filled the void. Never one to be satisfied Mahabir began to plan for a school in Nangi that would exceed the educational standards of Nepal in the 1990s. 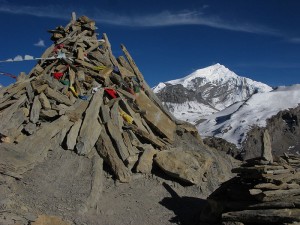 But first he did what most college students do after four long years of a nose to book existence. He didn’t try to find a job. He took a break. He visited his family in Chitwan and Pokhara. He joined the tourists and trekked along the Annapurna Circuit and in the Langtang area which is north of Kathmandu. Two months after his return to Nepal he found his way to Nangi to begin the arduous task of creating a high school.

By this time the Nepal government had raised the educational bar by adding the sixth and seventh grades to the Nepali curriculum. But the teachers and principle in Nangi wanted to add the eighth and ninth grades which at that time were considered high school level classes and a prerequisite for college. They had tried before but failed due to lack of money and teachers. The government paid the teachers salaries up to the seventh grade but any education beyond this was glitter on the blackboard. Unless they could provide this higher level of education most students were stuck in Nangi never to realize their potential in college because their families could not afford to send them away to school.

So Mahabir decided to stay in Nangi during the winter of 1993 and teach. He started an eighth grade with 20 students. He taught science, math and english. He helped the school apply for higher level education using his experience and degree. His dream began to unfolded and quickly snowballed into an educational avalanche of impressive proportions. His dream not only swept along the school but an entire village and ultimately an entire country.

What did you do after graduating? Travel? Work? Decompress? Move back home? Share your experiences with my readers and join me next week to see how the school in Nangi quickly became a model for other villages.