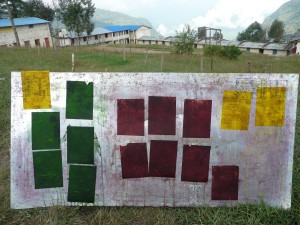 The first computer lab was housed in the blue roofed building seen to the left of the original one story school.

The arrival of computers and components starting in 1997 drove the need for a dedicated computer laboratory. The first building was designed to house a computer lab and it was built next to the existing school in 2000. Using funds donated by a group of Singapore volunteers and labor donated by the village a two story building was constructed. It had room for additional classrooms along with the computer lab. After the building was completed the Singapore volunteers arrived with programs, computers and boxes of computer components. 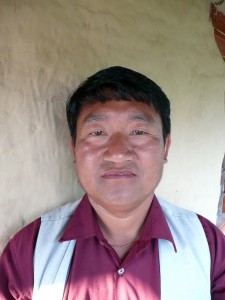 Krishna Pun was one of the first teachers to train in computer science and still leads the students computer skills education.

Using simply constructed wooden boxes Mahabir had fashioned the early computers for the school but using the Singapore computers, components and monitors he finally had “real” computers. He started teaching the teachers and students how to use the computers. Word had gotten out through a BBC article in 2001 about Mahabir and his plan to connect Nangi to the Internet so volunteers were coming from all over the world. These volunteers brought technical skills and also taught computer science. In 2002 the Rallapalli Foundation funded two teachers from Nangi to attend a computer course and receive formal training.

The need for an Internet connection was pressing and during 2001 to 2003 there were at least three organizations and multiple individuals working on creating the wireless connection. Mahabir had a talent for working the wireless projects from many different perspectives to increase his chance at success and progress. The goal was to connect Nangi to Pokhara, a large city in western central Nepal. Remember a civil war raged and Nepal had some of the worst electricity outages in Asia. The challenges were cumulative but Mahabir Pun’s drive would put fear in a tsunami.

Have you ever helped someone realize their dream? Share your story with my readers. Join me next week and read about the many people who worked with Mahabir to realize the first wireless connection from Nangi to Ramche and the opening of the students world to new horizons.