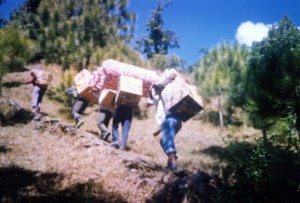 First computers and components from Janita being carried to Nangi. They would arrive in Beni by taxi and then be carried by porters ten miles with an elevation gain of 5000 feet.

The first wireless connection was created between Nangi and Ramche, the village on the opposite mountainside. Jonni and Johan, volunteers from Finland, helped Mahabir set up the links in March 2003. Jonni kept a diary and was kind enough to share some of the content. He wrote, “I met Johan in Nangi on 11.3.03, he was already there. He did the computer setup with linux, and some antenna testing on 15.3.03 The 1-litre antenna
was best. On 18.3.03 we tested a connection between Tek’s house (Nangi) and some
house very high on the ridge (belonging to Mahabir’s cousin), 600 meter
distance according to GPS. The day after, I went to Ramche with Mahabir.
The computer in Ramche wasn’t suitable, so we had to send some boys to
Nangi to get another one. Finally on the 20th day, we had a connection
between Nangi and Ramche. It was quite hard to aim the antennas…I had to climb to the
roof to do it myself. It worked with just the 1-litre antenna (around
20% signal strength rating), but we decided to use it with a parabolic
reflector taken from some old TV kit, such that we had the link up to 38%.
I noted that strong wind shook the antennas, and the signal went down to
15% at times.” 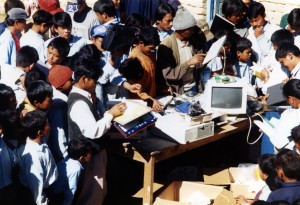 Students and teachers unpack the first computers to arrive in Nangi.

It took this first team over a month to get the connection up between just the two adjacent villages. Even then the connection worked only part of the time but it was a unique start. It helped the villagers, teachers and students see the potential. Teachers and healthcare workers were the first to use the computer connection to contact each other instead of sending a student with a written or verbal message. Before the connection information was sent via runners or anyone traveling between the villages, about a two to three hour walk.

Join me next week and read how Mahabir and a team of California college students used bits and pieces of equipment they shipped from the USA or found in Nepal to make the final connection to Pokhara and connect the school with the world.