Antenna in Pokhara. All photographs courtesy of Dr. Robin Shields.

The first permanent wireless connection was designed to connect Nangi in Myagdi District to Pokhara which was the closest large city. A test connection had been made by the original team in early 2003. It went from Nangi to a high ridge called Mohare Danda and then to Pokhara. Mahabir had used a relative’s house which was in line-of-sight from Mohare Danda, but the signal was weak and virtually unusable. Like many things in life the execution of a more permanent connection required part chance, part planning and a whole lot of sweat.

Robin, a former volunteer teaching English, had just  returned from Nangi to attend graduate school at UCLA. He had been in Nangi teaching English in 2002 when the Nangi to Ramche wireless system was being built by  Jonni, Johan and Mahabir. He had spent time with Mahabir but recalled he wasn’t very interested in the project. However that changed after meeting another student, Mark, in a psychology class at UCLA. Mark was the recipient of a $10,000 USD grant from the Donald A. Strauss Foundation, which is awarded to bright young future leaders. After hearing Robin’s story about Mahabir, Nangi and the wireless project he decided this would be his project – to help Mahabir connect Nangi to Pokhara. 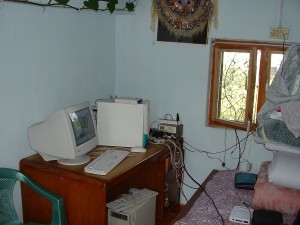 Throughout the winter and spring of 2003 Robin, Mark, another student named James, another former volunteer named Sage and Mahabir planned the wireless system via emails. Using his grant monies Mark ordered and paid for all the equipment. Sage provided wi-fi radios and Mahabir worked his magic of making all things come together. All the equipment had been packed in San Franscisco and traveled from flight to flight with the USA team. Arriving in Kathmandu they met Mahabir and began what was to be the most harrowing part of the journey – their trip from Kathmandu to Pokhara.

It was the end of monsoon season when rain still falls by the buckets and most of the roads are impassable, even the main highway from Kathmandu to Pokhara. Join me next week and read about their trip and determination to haul the equipment over miles of rough terrain, during a civil war while the rains tried to sweep them away.