It’s late August 2003 in Kathmandu, Nepal and the monsoon rains are still dancing in the streets. Mahabir met his team in Kathmandu and had rented the rear seats on what Robin described as a bad tourist bus. The trip on the tourist buses from Kathmandu to Pokhara is usually very pleasant and takes about 6-8 hours with a lovely stop at a garden restaurant for lunch, but this proved to be the “bus ride from hell” and lasted 36 hours, according to Robin. First, during the civil war there were many army check stops which required buses to unload the riders and undergo inspections. The tourist buses were often spared the unload but were caught in the long queues of local buses. 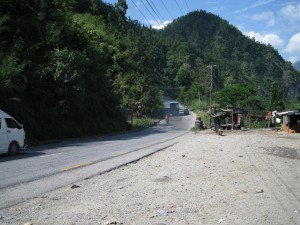 The road hugs the hillsides and follows the deep river valleys notorious for dangerous landslides from the rainy season…and this late into the season there were multiple landslides of thick mud and debris. Ultimately the team proceeded by a convoy of buses. When a bus came up against a landslide the riders would help dig out the mess, but when the slides proved massive they would transfer their gear to another bus on the other side of the 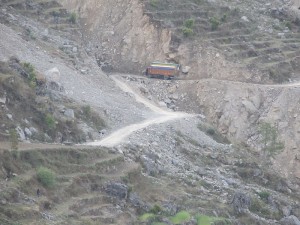 debris. At one point they had to hire porters to help carry the supplies over two miles of road through mud and fast moving water. The porters, wearing only flip flops, carried the well traveled and precious wireless cargo which included large solar panels as the team negotiated with their backpacks. Exhausted by the end of the first day they were fed and housed overnight at a high school. The magic of Mahabir and Nepal never ceases to amaze me…at the darkest hours someone will offer shelter.

Robin said the team was discouraged by the rough start…if it was this tough to get the equipment over the best highway in the country then how would they get it up into the mountains? But no one was ready to quit. On arrival in Pokhara they examined the equipment and found that “nothing went missing and nothing broke” despite having traveled 7700+ miles from San Francisco to Pokhara by plane, taxi, bus, porter and the grace of the Nepali gods.

Have you worked on a project against such great odds? Share your story with my readers and join me next week for the start of the wireless setup in Pokhara.