Mahabir and the team started the wireless system by setting up a base station in Pokhara at the house of Mahabir’s uncle. Local welders built a tripod with a long pole and mounted 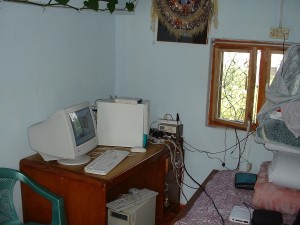 the equipment at the top. This system was comprised of an antenna, radio and ethernet cable which plugged in to connect to the Pokhara server. It was tricky to get it raised but Mahabir knew which direction to point the antenna. It was aimed towards Mohare Dande, then known as Relay Station One. This relay station far up in the mountains and about a two days walk from Pokhara was actually in a direct line-of-site with Pokhara. I’ve been up at Mohare Dande. You can see the lights of Pokhara but It took me 12 hours to walk downhill, at about three miles an hour, from there to the road and another hour taxi ride to get to Pokara to give you an idea of the distance. I still find it a feat of technology that a signal can make it from Pokhara to Nangi via this one simple relay station. 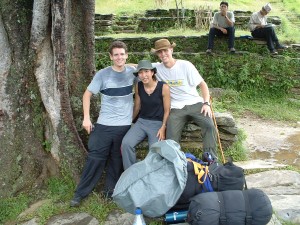 Team on path to Nangi.

Packing up the equipment the team set out for Nangi, a three hours drive by taxi and then nine hour walk gaining 5000 feet over 10 miles. Porters again carried the equipment, this time high into the mountains. Mahabir set up a similar system in Nangi using the new and previous equipment which had been installed in the early attempts to connect. Robin said the systems weren’t hard to install and those early models were actually designed to be installed by technicians and not engineers. The Nangi connection was aimed at Mohare Dande. Think of Mohare Dande as sitting on a mountaintop between Nangi and Pokhara.

The next location would require the team to climb higher into the mountains to Mohare Dande. Join me next week to learn about jugas, tree top antennas and one man’s ambition  aided by a gifted team.