Mahabir Pun quit teaching and left Chitwan in July of 1987. He left behind a successful and satisfying teaching career along with his family. He had no wife or children of his own and his younger siblings had finished their education, so he was free to do as he dreamed. And dream he did…of studying overseas in America. 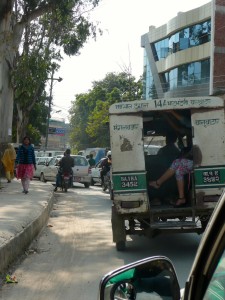 The tuk-tuk is a three wheeled taxi in Kathmandu.

He lived in Kathmandu and applied to colleges in the USA and England for a year and a half. Using money from his Provident Fund, which was a required savings of 10% of his teacher’s salary that was matched by 10% from the government he managed a meager existence paying for room and board as he researched and applied to schools. This was not a pension as the funds were available if you quit or retired. Remember his 225 rupees/month ($2.35 USD) starting teachers salary? Thirteen years later he was making 1500 rupees/month ($15.68 USD). Mahabir told me this was “an OK salary” back then.

This was the pre-Internet era so he went to the American Library, housed in the US Embassy, for information. Many countries that had embassies developed libraries that allowed open access to ex-patriots and local Nepalese. The libraries had catalogues and videos that provided all the information needed to apply for study abroad: requirements, how to apply, application forms, and addresses. 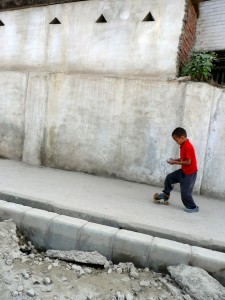 Like this young boy, Mahabir Pun got around Kathmandu by foot during his years of applying to study abroad.

Mahabir mailed one letter a day. He requested a full scholarship to study Education at each institution. He applied to hundreds of schools. Many schools returned formal letters of rejection and maybe 3-4 letters offered some hope. He recalls receiving a letter from Piedmont College in Georgia, which offered a small sum of scholarship money, but without a full scholarship he could not afford to go. Then one day he received a letter from the University of Nebraska at Kearney from Dr. Leonard Skov. Dr Skov was the Dean of Education at UNK. So began a mentorship that was to last for decades and once again changed the trajectory of Mahabir Pun’s career.

Did someone change your life through mentorship? Have you mentored someone? Share your story with my readers and join me next week to read more about Dr. Skov and Mahabir Pun’s growing friendship.