Someone asked me, “How did Mahabir actually get to Kearney?”. So I asked Mahabir for more details and the story he told me comes as no surprise. It made me draw in my breath, laugh and sigh at the sheer incredulousness of a man driven by faith in his universe, path and fellow man.

After receiving confirmation from the college Mahabir and Dhananjaya applied for and were granted visas without difficulty. Dhananjaya received money for his trip from his family but Mahabir’s travel plans became more complicated. This story is best told in Mahabir Pun’s own words, so read on…

“but I had no money with me to get air ticket and for some other expenses. Therefore I visited many people, who I thought would help. In the mean time one of my friends had helped to book air ticket through a travel agent but I did not have money to pay for that. The cost for the air ticket was seven hundred dollar. 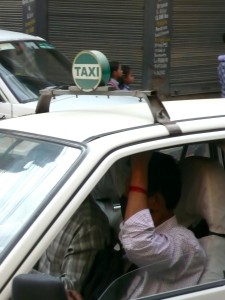 Typical white Kathmandu taxi. These are 20+ year old Toyota or Suzuki brand vehicles. Sitting in the back seat over rusted floor boards…you may have to extract a spring from your derrière.

“Since the college had provided partial scholarship, we had to have some money to pay for the school expenses. However, I could not get any support from the people I asked for help. Then I went to one of my cousin’s husband and asked if he could help. He was working in Nepal Army and his designation was Major. He had just arrived from the peace keeping  mission of UN in Lebanon. He told that he had brought two VCRs and I could sell one and use the money. It was a time in Nepal that TV and VCR were very expensive and were new. I took the VCR and sold it in the market at around $900 (USD). Then another friends, whom I had helped in the past and was working with a British Project, provided about $500 (USD). One of my student at high school, who was running a shop in Kathmandu provided about $200 (USD). The money were received just about a week before our departure date to the US. Thus I got the money in Nepalese Rupee.

“However, the big problem was to exchange the money in dollar. We had to get approval from the Ministry of Education to get permission for exchange. Dhananjay and I went to the Ministry of Education, filled up the request form and submitted five day before our departure date. The process was so slow that we did not have permission to exchange dollar just a day prior to the departure date…We had not paid for the air ticket also because they required the payment in dollar. The Education Ministry people gave the dollar exchange permission letter just before 4 pm and our airport reporting time was 11 AM the following day. The bank was closed by then. We showed the dollar exchange permission letter to the airline and they issued the ticket around 5 PM. The only baank that could issue dollar that time was Nepal Rashtra Bank of the government.

“The following morning, we went straight to the bank at 10 AM with our baggage and the bank was not even opened. Around 10:20 the manager showed up. We requested to the manager in the bank to help us get the dollar as soon as possible and we showed him our air ticket. Still it took some time to do the processing and we got dollar at 11 AM. We took a taxi and headed straight to the airport and arrived there at 11:30 AM, which was not too late. After we checked in we took a deep breath of relieve. Thus we left Nepal for the long trip to the US.”

Have you ever had a a frantic rush to meet a deadline? Did you ever ask yourself if circumstances were truly out of your control? or do you secretly enjoy the drama and suspense? Join me next week as I take a break in the story and give you a pictorial armchair experience of Kathmandu.