In 2011 the World Bank had this to say about renewable energy in Nepal: “A large section of the Nepalese population is deprived of electricity coverage despite huge hydropower potential, particularly in rural areas. About 63 percent of Nepalese households lack access to electricity and depend on oil-based or renewable energy alternatives. The disparity in access is stark, with almost 90 percent of the urban population connected, but less than 30 percent of the rural population. Nepal has about 83,000 MW of economically exploitable resources, but only 650 MW have been developed so far.” This comes from the World Bank study, Power and People: The Benefits of renewable Energy in Nepal. It’s worth reading the entire article but the crux of the matter can be found in the Executive Summary pages xii – xix. 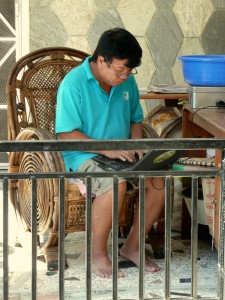 Mahabir Pun at work on his porch in Pokhara, Nepal.

The Nepal government is famous for instability, false starts and sudden stops. Mix in quirky general chaos reserved for kindergarten classes and you have the reasons why Nepal, which has abundant natural water resources has failed it’s people miserably. This Nepali Times article sums up the expected outcome from Mahabir’s initial 2012 meeting with the Prime Minister of Nepal, Baburam Bhattarai. Since developing and presenting his National Innovation Center concept Nepal has transitioned though three new governments. He is again hoping to talk with the newest leaders during the summer.

Mahabir Pun has developed an excellent solution to a complex problem which ties education and development in a novel concept, yet the Nepal government can not move from their narrow view of the world to a global solution. Perhaps it is the magnificent Himalayan mountains that block their view or their own short sightedness as to personal gain, but no matter the reason Mahabir will continue to seek funding and promote his concepts. To quote Mahabir on a recent Facebook post, “This is a crazy idea but a good idea too.”

Join me next week as I wrap up Mahabir Pun’s visions for his country and offer additional insights into the man…the man who many Nepalese think should run for Prime Minister, but for whom this idea holds no sway.