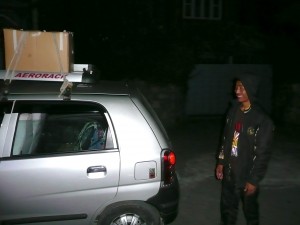 The taxi hatch, roof and every inch around me in the backseat is loaded with supplies.

Chitra Pun, the Field Project Manager for Himanchal Education Foundation (HEF), and I spent a few days buying supplies in Pokhara, then set off at 5 am one morning for Nangi. The 3-hour bouncing taxi ride from Pokhara to Beni is a nail bitter with washed out roads, potholes the size of elephants and enough dust to choke a rat. Beni is a classic trading town clogged with huge trucks, cheap Chinese goods and dozens of Nepali men looking for day jobs as porters. There is a 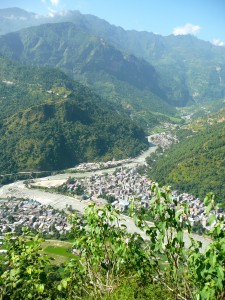 Kali Gandaki river in the foreground as it meets the Myagdi Khola river in Beni. The Kali Gandaki is a holy river as evidenced by the many cremation pyres and burial mounds along the banks. It courses through the deepest gorge in the world just north of this site.

road from Beni to Nangi, but still impassable after the rainy season. I prefer walking and it felt great to start hiking to Nangi…at least for the first 3 hours…the 10 miles isn’t bad…the 5000 feet elevation gain isn’t so friendly.

Along the way we encountered people going up and down the mountains carrying store bought goods and local produce. My favorite sights are the “walking haystacks”. It’s grass-cutting season, when grass is cut, carried in huge baskets and stored for animal feed much like our hay in the USA. All you see are feet walking under mounds of fragrant grass. I’ve tried it…cutting grass with my Nepali friends…the delightful aroma is soon lost to the backbreaking, sweating work of bending over and swinging a small hand-help scythe for hours.

The most astonishing sight was an elderly porter carrying a 19-inch TV set in its box. He had been hired by three women to carry this all the way from Beni to Nangi. He did this using a traditional head strap, called a namlo, which is secured around the box and then worn across the forehead. The extent of his labor was not lost on a single person who watched him trudge a few dozen feet…pause…sigh …and repeat the whole brutal struggle. I shifted my small daypack and decided to stop whimpering for the last two miles. 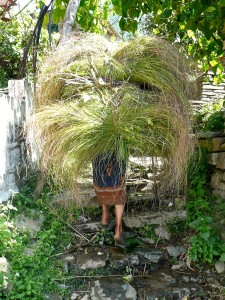 Next week meet you’ll Chitra Pun. He is a man who rides through life much like water in a stream flows around boulders. He is the person who overseas all the projects and activities of HEF and the village. If Mahabir is the brains then Chitra is the brawn…and sweat…and tears.

Kathmandu would be my last stop before leaving Nepal so after arriving at this capitals chaotic international airport, I took a hop, skip and jump to the equally chaotic domestic airport next door and caught a 45-minute flight to Pokhara. Pokhara is a popular tourist city and the beginning of several treks into the Annapurna and western areas of Nepal. Phewa Tal is a lake that anchors the western part of the city and provides fresh fish for the local tourist menus. I never could convince myself to try the native fish in a country where dumping all waste into the local rivers is the accepted sanitation system, but I hear it’s good.

I stayed a few days at Mahabir’s home giving me a chance to visit and interview Ommaya and his daughters Juna and Jharana. Interviewing Ommaya proved the hardest of all the interviews even with Mahabir away in Kathmandu. She is shy, my Nepali is as bad as her English and my questions proved to be a cultural hurdle. We sorted out her demographics and important dates such as when they met, were married and had their first child but esoteric questions such as; “How do you feel about Mahabir being away most of the time?” were met with puzzled looks. It was a way of life for her, it wasn’t an issue and she offered no opinion or answer, as I don’t think she had thought about it. When I asked Mahabir about it, he said, “Nepali women are used to this”, but I am still skeptical and searching for answers from other Nepalese women. 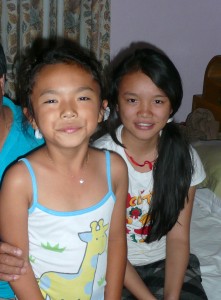 I spent the most time with Jharana, aged seven. After school she would get her homework and sit on the floor working through her math, reading and social science…all in fluent English. In the evenings she would watch me type emails and correct my spelling…when I pointed out auto correct she frowned and said, “you can’t learn that way, you must look it up!” She had little patience for my poorly pronounced Nepali and would simply shake her head, roll her eyes and repeat the word using her most exasperated schoolteachers voice. It was quickly apparent she favored her father. Juna, aged thirteen, seems more like her mother but I saw little of her because she left for school at 6 am and returned at 7 pm. She would tease Jharana in the only way a big sister can during dinner and like all teenagers she fussed with her hair before having her picture taken.

In the tradition of all Nepalese families this home shelters an extended family of sister-in-laws, brothers, cousins, children and miscellaneous former Nangi students attending college. I am always welcomed, sheltered and fed making it hard to say goodbye the morning I departed for Nangi. Next week please join me for a riot of photographs describing my trek to Nangi.

For the last three weeks I have been traveling around central Nepal collecting information for the book. My travels have taken me from hectic Kathmandu to peaceful Pokhara to welcoming Nangi to the cold isolated mountainous Annapurna region called Mohare Danda, elevation 10,827 feet, to the flat southern region called the terai. On this journey I have interviewed people as varied as Ommaya, Mahabir’s wife who was born in a neighboring village; Saroj, an old Kathmandu high school friend; and Francis from California who only met Mahabir a few months ago. 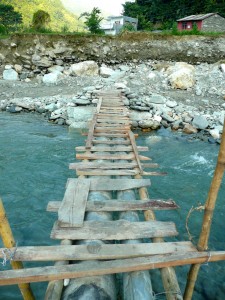 How to negotiate a washed out road…balance your backpack, stare straight ahead and pray the local bridge engineer had lots of experience.

Visiting Nangi, Mahabir’s birthplace and site of his first social endeavors, has given me insights into his past. I was able to photograph the location of his birth and early years, the site of his former school and even the worn stone steps he walked daily to that small school taught by informally educated village elders. I interviewed teachers who worked with him for years and newer teachers just starting their careers. I would sit on a small hill just above the school and contemplate the changes that have occurred over the years in Nangi. Mentally I compared Nangi to other villages I walked through or visited. These villages are affected by the encroaching roads and modernization but not to the extent of Nangi. The pace of life in those villages isn’t driven by a man who sees only the future…it is driven by the need to survive. Although changes have occurred, such as seeing people with cell phones, for the most part, the people who live in those villages live as their ancestors did a century ago.

But in Nangi the changes are palpable, even over the short 10 years since I have been coming. Spearheaded by one man’s dream but carried forward by so many others the question I ask myself is this: Is this one man’s dream or a compilation of many individual dreams shouldered by one man? Leadership demands creative humility but also an egotistical self-confidence…I have been searching for answers as to how this man balances the two. What I have uncovered is both a simple unidirectional man determined at all costs to move forward in a linear fashion with his dream and a complex man who moves in so many directions it is impossible to track.

To understand my passion for the book is to understand my passion for Nepal. It is both exhilarating and depressing, energizing and exhausting, satisfying and frustrating. Adjectives I can easily apply to Mahabir. Over the next few weeks I plan to tell the story of my visit in more detail and in pictures. So stop back and see the scope of my work and travels…I promise to tweak your interest, vibrate your heartstrings and incite your sense of humor.

Remember I said Mahabir gave his blessing to write the book. What I didn’t include was the next few lines of that email, which read: “However, I don’t like to be called a wireless man or wireless prophet because this is not my actual field of interest. I have much bigger goals and I don’t want to limit myself in wireless field. It is just a tool and I worked on it at a time when there was no communication means.”

The title I chose, “Wireless Prophet”, was the first one that came to mind when I started to give serious thought to the book. Yes, here I go with the cart before the horse, but having a name gave the book believability in my mind…never mind that 300 blank pages trailed after the title. I wrote about this in the first blog entry, that the wireless does not define him…it is his means to an end. But if he doesn’t like the name of the book, that leaves me with an ethical dilemma…honor his request because he is, after all, the subject or exercise a writer’s creative prerogative.

But on long haul flights, like the 20+ hour flights to Nepal, I go window. If you angle the seat just right…stuff your jacket in the tampon sized pillow they provide…and tilt like the leaning Tower of Pisa you can actually sleep. I say usually…unless the person next to you spends the entire 7-hour flight playing video games on the touch screen TV with her pen…tap…tap…tap…tap…tap…all night long. But wait, I exaggerate…she paused for an hour to read the Sky Mall magazine, carefully shopping and then reading aloud her choices to her travel companion seated across from her. Think nasal accent, high-pitched voice and the following “I rather fancy this. Listen and tell me what you think; The authentic cashmere quality lining, oh, it’s authentic quality cashmere!” I estimate she outfitted herself for the fall and winter along with upgrading all her electronics and restyled her home in Asian motif by the time we were circling London for the 3rd time. 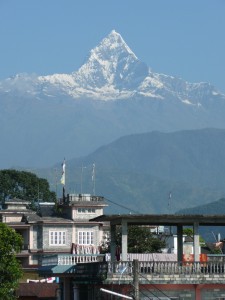 Second question: social or anti-social? If everyone would just wear a label that said “I’m a chatterbox or I just got divorced or I’m an interesting person” it would be so much easier to decide if you want to exchange intimate details of your life with the person crammed against your elbow. I tend to play it safe and just bury my nose in a book or assume the gargoyle posture when my seat companion starts talking. Maybe next flight I’ll just start tap, tap, tap, tap, tap dancing in my seat.

So I promised I would include the table of contents in this post. The one thing I learned from that was to never make promises that you don’t already know are true. Not ready for prime time quite yet…and I’m not making any promises except to say next week the topic is the book’s title.