Mahabir, myself and Matthew, a Canadian volunteer, walked to Nangi from Beni on a beautiful sunny day. Mahabir had business to finish in Beni so he took us to the path and told us to start walking…and we did walk…fast. Mathew was over a foot taller then me and his strides were enormous so we covered a few miles quickly despite the uphill terrain. About an hour later we heard Mahabir shouting to stop…looking downhill he was running and waving his arms.  First and last time I ever saw him get excited. He arrived breathless and said we were on the wrong path. 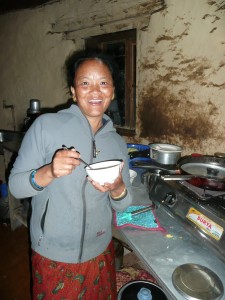 But how could we be? All the way up we had stopped and asked people walking down and people sitting outside their homes the same question: “Is this the way to Nangi?”. Everyone had nodded or said yes. What we didn’t understand was that any question from a tourist in Nepal is answered with “yes”. Few people in those days could speak English, but they didn’t want to disappoint a visitor so they politely replied yes. So I would ask: “Do you speak English?”…and the answer was always “yes”…and still I would persist…”do you understand what I am saying?”…and of course the answer was “yes”. It took me a long time to catch on to the endless possibilities…of polite “yes” answers… and “yes”, it got me in trouble many times. 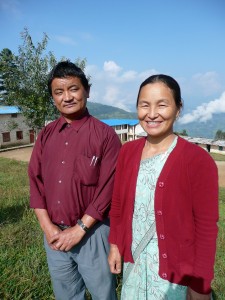 Rupa and her husband Boj.

I arrived in Nangi and was greeted by Lila and Rupa, the two healthcare workers. They hid behind their head scarfs and giggled after introductions. They took me to a ramshackle building with holes in the roof, rats under the floor boards and two small rooms that sometimes served as the clinic. The medication room, which served as an office, had shelves for medications and a small table. The exam room was occupied by a typical wooden bed covered with a torn, stained thin piece of foam. Barely big enough for the three of us to stand in the rooms were 6×4 feet.

Most of the time they worked out of their homes because they made house calls to see patients too sick to walk to the clinic or they delivered babies in the security of the mother’s home. Mahabir understood they could do more with knowledge. They could acquire skills and provide advanced care…he saw the connection before I understood my most important duty…to teach more then provider healthcare.  I would come to understand over the years the genius of his pairing the right people at the right time.

Join me next week for one more volunteer story…about Jonni from Finland…who did more for the health of the village then any medical team.

I also stumbled across Mahabir Pun in that famous BBC article while searching the Internet for a medical organization in Nepal that accepted volunteers. I wanted to trek in Nepal, but like many people I felt guilty on some level traveling for pleasure while 1.9 billion people in the world lived in poverty. Volunteer work was a way to temper the guilt. I contacted Dr. Leonard Skov, HEF’s director in Nebraska, and simply asked if they needed a volunteer doctor. 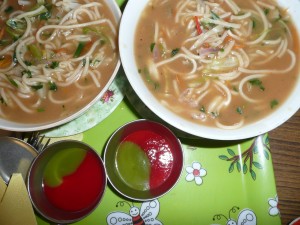 I spent about a year preparing by studying about Nepal and collecting medical supplies. My contacts in the Wilderness Medical Society led me to Dr. Stephen Bezruchka who had lived, worked and written extensively about the country. His books included travel and cultural advice. We emailed for months and he spared no criticism. He forced me to examine why I wanted to work in Nepal…what were my motives, how did they influence my interactions and most importantly did I understand how much harm I was capable of inflicting…not medically, but with my own cultural biases and ignorance. I came to realize everyone has good intentions…which are not very helpful…what you need is knowledge and experience. If you lack these critical skills then find a mentor. 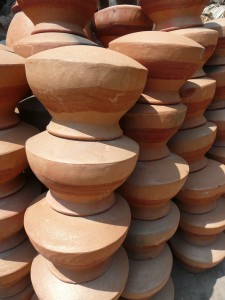 Traditional clay pots drying in the marketplace of Bhatapur.

My first trip in April 2002 was an awakening. Arriving in Kathmandu is like being thrust into the 1960s. As a former hippie I kept thinking I was four decades too late. Surrounded by a cacophony of blaring horns, shouting and enough people to make Times Square on New Years Eve seem desolate I followed Mahabir out of the airport. My first introduction to Mahabir was short, as he left me at the hotel with his friend. He would meet me in Pokhara in a few days and escort me to Nangi. My first impression: He was very quiet and unassuming. The following day I flew to Pokhara, a large city in western Nepal and Mahabir’s home. Mahabir’s uncle, Deobahadur, met me at the airport on his motorcycle…he deposited me and my four large bags of supplies into a taxi which arrived at his three story house on a quiet street in northern Pokhara. Here I met the extended family including Mahabir’s wife, Ommaya, and his eldest daughter Juna, who was three years old. It is customary for multiple generations and extended family members to share a home both in the rural and urban areas. 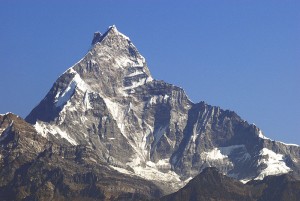 I spent the next several days under the tutelage of Deobahadur, a retired Gurkha. I have come to know him over the last 12 years as a kind, educated and wise man. During that first visit he took me all around Pokhara and explained the culture. He introduced me to dozens of family members and friends. He housed me, fed me and together we sat on his rooftop drinking Nepali beer…which by the way comes in only quart sized bottles. Up on the roof we philosophized about the future of Nepal while watching the sun set on the magnificent Machapuchare.

Join me next week for more about my first visit to Nepal and the challenges of working in a small rural clinic a days walk from the nearest road…without running water…or electricity…but with two of the most energetic, smart and welcoming health providers I have ever met. Please join me next week to meet Lila and Rupa and begin to understand the genius of a man who knows exactly how to pair the right parts of a plan.

One of the earliest first supporters of Mahabir Pun’s dream were a couple from Australia, Janita and Todd. They had traveled to Nepal in 1993 to trek. They found the country to be breathtaking and the people even more beautiful. Like many travelers they felt a need to give back to a country steeped in poverty. In 1995 using some of the earliest search engines they stumbled upon Mahabir and his vision. They knew this was where they wanted to cement their contribution to Nepal. 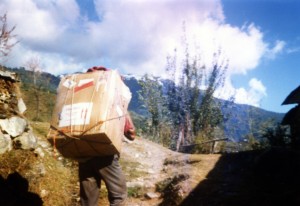 A Nangi student carries a box of calculators and books up the steep hillside.

Janita was a budding teacher and having limited personal finances she turned to her students at Billanock College. Bending their minds and influence they stirred their local community into donation mode. Thirty solar calculators were donated to the school in Nangi in 1996, along with books and sports equipment. Packed in boxes shipped from Australia they were transportation from Kathmandu to Beni by bus and truck. The students then spent two days carrying the boxes 10 miles and 5000 feet up the mountainside to Nangi. In those days there was no road from Beni to Nangi. 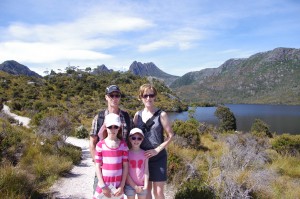 Continuing their support over the years this couple were responsible for garnering donations to open the first Nangi Health Clinic and send the first computers to the school in 1998. All of these successes were achieved in small steps. For example, the college students sold snacks at lunchtime to raise money and Janita convinced friends to donate or refurbish older computers. Over the years the couple has continued their support for various income earning projects and most recently contributed to the funding for Mahabir’s Thamel restaurant, the Nepal Connection. Janita also wrote and published a short story book about Mahabir’s life called “Eye on the Goal”. It can be viewed and purchased here. Janita and Todd have since brought their two young daughters to Nepal and hope to instill in them life lessons about dedication, service and living your own truth.

As HEF’s volunteer coordinator for the last 10 years I’ve met many volunteers. We have worked together in Nepal and they have welcomed me into their own homes. Others I only know through phone conversations and email. Some have become friends. They come from all over the world, some with purpose and others searching for their own dream. There are young, middle-aged and seniors. They are mostly educated from varied occupations and social backgrounds. Some come once, but many return or continue their support through donations of time, skills, equipment and money. Despite their cultural differences their stories all carry the same thread…they are humbled and inspired to work with Mahabir Pun.

Join me next week for my own volunteer story, because it is the one I know best speaking from the heart.

In the 1990s Mahabir Pun became known to small groups of people around the world. It really started in a grassroots fashion. First his supporters in Kearney, then as each new person came to volunteer in Nangi they would tell someone else and the word spread. Mahabir and other volunteers would meet world travelers in the tourist district of Kathmandu, called Thamel. Travelers with loose itineraries and time would go to Nangi and stay for a few weeks teaching at the school or planting trees. They would often stop back in Nangi to volunteer after their world travels and bring others with them. New projects, such as reforestation programs, brought students mostly from Asian universities to plant trees. All these volunteers spread like a web of underground cables to pass the word of one man’s dream. 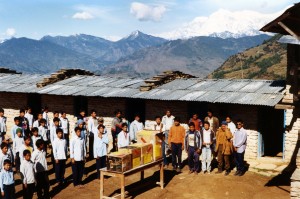 Students in Nangi wait for the opening of boxes containing the first computers. Photo courtesy of Janita.

The late 1990s and early 2000 saw a few volunteers bringing computers and components. But it was a trickle of support and Mahabir was soon to see a landslide of publicity which opened the door to fund his dream. Mahabir’s big break came from a BBC news article that appeared October 22, 2001 entitled “Village in the clouds embraces computers.” A second article that followed the next day was titled “Praise for ‘inspirational’ web pioneer“, and written due to the hundreds of readers who responded to the first article. This put Mahabir Pun and his initiatives in the world’s eye. Volunteers from all over the world wanted to help him. It was the kickoff for the wireless network described in the previous chapter.

If you have been a volunteer with Himanchal Education Foundation or Nepal Wireless or simply met Mahabir, share your story with my readers. Join me next week for more stories about the early volunteers and how Mahabir’s influence shaped some of their career choices.