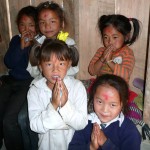 Will the job market in Nepal support these young students when they are ready to work?

Mahabir Pun has an ambitious plan to support one of his greatest passions: to keep the young talented Nepalese minds in Nepal. He is a proponent of stopping what is called the “brain drain” in developing countries. This is the movement of educated and skilled individuals who travel abroad seeking jobs in developed nations. He has proposed starting an Innovation Center in Nepal which would foster creative thinking and create jobs to stop the brain drain. 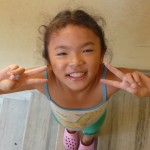 Mahabir Pun’s daughter, Jharna, has a bright future, but will she have to leave the country to realize her dreams?

I’ve listened to arguments on both sides of this debate. Others argue if their are no jobs for trained liberal arts, health or technical graduates in Nepal then why force them into a job that doesn’t utilize their skills. Let them go abroad, develop those skills but find a way to bridge the gap back in Nepal. For some this simply means sending money home to help families with basic needs and education. For others like Sandeep Giri, president of Gham Power Nepal, it means living abroad and building business skills which are used to develop a business model and solar industry in Nepal. He business provides a much needed resource and employment. It also strives to service the rural poor with a Rural Microgrid Plan. 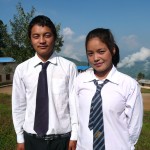 A young student couple in Nangi hope to further their education by going to college. But what career should they choose and will they find a job in Nepal?

Even as far back as the 1800s young Gurkha men were recruited by the British government to serve in the army. They were considered fierce and strong minded warriors. They traveled the world but many eventually went back to Nepal and provided support for their remote communities by building schools, developing income earning industry and offering scholarships. They were also some of the first informal volunteer teachers in rural schools teaching the basics of reading, writing, math and English. These are the men who taught Mahabir Pun in the small schoolroom in Nangi back in the 1950s and 1960s.

Mahabir Pun was a fortunate and unique rural student who benefited from “brain drain” countrymen who left and returned. What would his life had been like if he hadn’t had retired Gurkha soldiers teaching…probably the same because he had forward thinking parents. His own father was a retired soldier. But what about the students who manage to educate themselves…what is in their future in a country that can’t provide the basic infrastructure to support growth and development? Here is where the Innovation Center offers hope. Join me next week for details about Mahabir Pun’s concept.